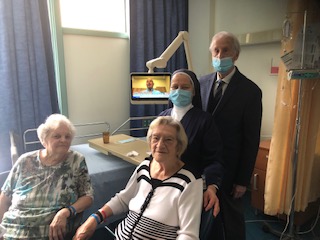 This initiative was launched after the general management of the health establishment realized that several patients were suffering from boredom. This situation worsened during the pandemic, when it was impossible for the television rental company to circulate in the hospital and make the necessary connections.

In addition, the costs associated with the rental of televisions were high, and often too expensive for patients.  Marie-Clarac now wants to provide a television service for everyone without distinction, in order to break the isolation of patients. While providing entertainment, television activates cognitive functions and helps prevent confusion, making it an important resource for the well-being of patients.

In addition, an internal channel will broadcast educational videos on various subjects such as rehabilitation exercises to do in the room, users’ rights, as well as clips on nutrition, nursing care, infection prevention and control. You can also find the date, time and weather.

Thanks to the generosity of its donors, the Foundation granted $350,000 to purchase hospital-grade televisions and install them in all rooms. A sum of $25,000 per year will then be required for cable services. The Foundation relies on the support of a donor to finance this service each year. In the picture, we recognize Sister Martine Côté, Executive Director of Marie-Clarac Hospital, and Mr. Raymond Paquin, founder of the Marie-Clarac Hospital Foundation and assistant to the secretary-treasurer, accompanied by two users of the establishment who benefit from the new free television service.